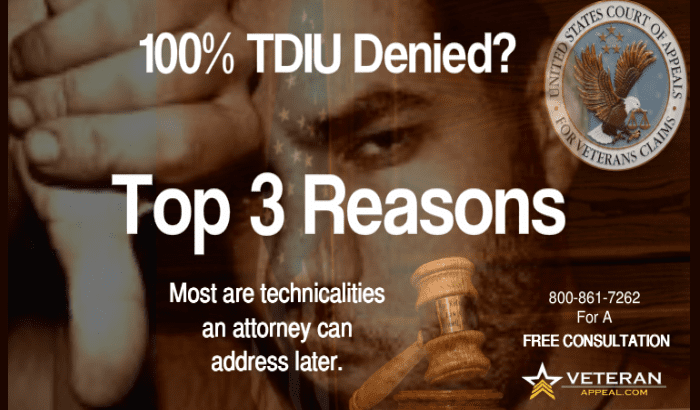 Why are so many claims for 100% TDIU Denied? To say the least, the initial disability review process is not Veteran-friendly. There is only so much money to go around. So, claims review agents (CRAs) often look for technicalities and other loopholes to deny claims or at least significantly reduce awards.

Things are much different in the appeals process. At an appeal hearing, an attorney can introduce evidence and make legal arguments. Therefore, the Veteran, or Veteran’s family member, has a strong voice as opposed to a muted one. So, many claims settle on favorable terms before this hearing takes place.

Getting to this point can be very frustrating. It is important to understand why CRAs deny claims and how an attorney can respond to these denials.

The VA often requires Compensation & Pension medical exams (C&P exam) in ratings increase cases, but they may require C&P exams in other contexts, as well. If the claimant does not attend this doctor’s appointment, the VA might deny the claim altogether. Or, the VA may apply the dreaded “as-is” label, which basically means “we will consider this matter when we feel like doing so.”

Most veterans disability applicants are punctual and reliable people who have serious medical issues. As a result, if the veteran does not make it to the C&P exam, there is almost always a reason why. For example:

As mentioned, at an appeal hearing, an attorney can make arguments in this area, such as lack of notice or accommodation.

Often, the VA orders C&P exams if the service link is disputed. These disputes are especially common if the claimant is a Gulf War or War on Terror veteran suffering from breathing problems.

Legally, there must be a reasonably direct connection (nexus) between service and injury. In the aforementioned breathing problem cases, the VA often says that the desert climate is to blame.

The VA often rejects claims outright on this basis. At an appeal hearing, an attorney can present an independent doctor’s assessment which concludes that there is a nexus between the illness and service. Typically, that is enough to reinstate the claim.

Claimants suffering from Post Traumatic Stress Disorder must point to a service-related illness, injury, or other event which caused the PTSD. Many times, the medical records are vague on this point. That vagueness is enough to justify a claim denial. Or, in most cases, the VA simply reduces the offer based on the weak evidence, and hopes that the claimant will accept the “low ball” proposal.

At an appeal hearing, an attorney can introduce additional records, such as service records, which often identify a triggering event. In the alternative, buddy statements are usually sufficient.

Team Up with Hard-Hitting Attorneys

Most initial denials rely on technicalities which an attorney can address later in the process. For a free consultation with an experienced veterans disability lawyer, contact Cameron Firm, PC at 800-861-7262 or fill out the contact box to your right. We are here to successfully represent veterans nationwide.