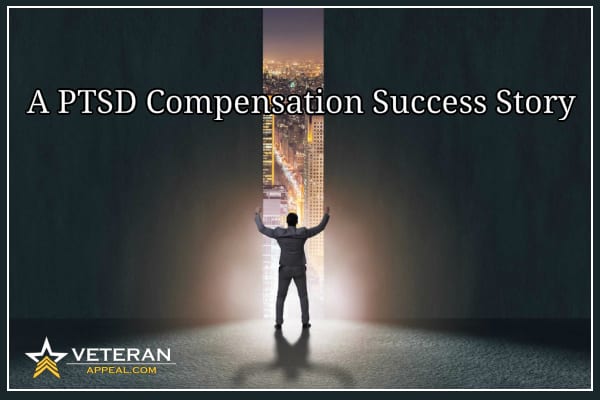 What is necessary to build a successful PTSD Compensation claim? Post-Traumatic Stress Disorder (PTSD) claims are quite complex. The brain can tend to hide its own injuries, so when VA doctors ask about symptoms, Veterans often minimize the obstacles they face in their everyday lives.  Moreover, PTSD is difficult to define.

Frequently, Veterans with mild PTSD symptoms self-medicate with alcohol and other substances. This self-medication typically makes their symptoms worse instead of better. In the face of these complexities, it is usually best to stick with the basics and build a case one piece of evidence at a time.

Even though VA disability appeals are quite complex, our VA disability lawyers use this same simple, straightforward approach in every case we handle. This previous case is a good example of a PTSD compensation success story. The Claims Examiner initially denied our client’s claim, asserting there was no service-related connection.

Appeals may consider new evidence if it “raises a reasonable possibility of substantiating the claim.” That is a rather low standard for PTSD compensation. And, it is the standard which applies to establish a service-related connection. There are three basic elements:

In PTSD cases, the Veteran must also present a current PTSD diagnosis consistent with the Diagnostic and Statistical Manual of Mental Disorders.  A Veteran must then link the PTSD with an in-service stressor, such as a combat experience, and provide corroborating evidence of that stressor.

The connection need not be direct.  A “nexus,” or indirect connection, is sufficient. Obviously, however, the stronger the connection, the better chance the Veteran has of obtaining benefits.

In 1999, a C&P doctor concluded that our client did not have PTSD, mostly because this Veteran suffered no signature symptoms and had multiple psychological conditions. Our team presented additional evidence of psychological problems as well as corroboration of in-service stressors, such as dehydration on a long march, the possible witness of a sexual assault, and an injury in a motor vehicle accident.

A 2005 report concluded that the Veteran’s issues “most likely” began in childhood, and the service stressors “most likely” exacerbated these issues. Several other doctors reached the same or similar conclusions. That evidence was sufficient to overcome the VA’s denial and convince the BVA that our client did indeed have service-related PTSD.

The sexual assault witness incident might have been key. The Board was not particularly swayed by the other stressors. The Army eventually cleared the alleged rapist, concluding that the encounter was consensual. However, the doctor examined other corroborating evidence, including photographs and medical records, and concluded that the Veteran reasonably believed he had witnessed a sexual assault and that this incident was indeed a PTSD stressor.

All successful VA benefits claims are based on a thorough understanding of the rules and compelling evidence. Our experienced team knows the rules, and they know what evidence will be most persuasive.

It is also important not to give up. In the above-referenced matter, it may have been easy for the Veteran to quit.  But he did not give up, and neither did we.

PTSD claims are difficult to establish, but we have a solid track record in this area. For a free consultation with an experienced Veterans disability lawyer in San Diego, contact the Law Offices of Peter S. Cameron, APC at 800-861-7262 or fill out the contact box to your right. We are here to represent Veterans nationwide.

The Veteran Appeal Lawyer is based in San Diego and provides assistance in cases nationwide.