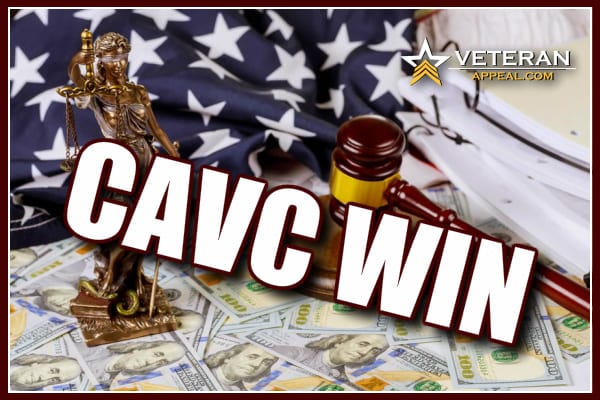 In this article, we explain the claims process and go over what it takes to successfully appeal for CAVC win. The Board of Veterans Appeals (BVA) resolves many disability cases. The crowded BVA docket resulted in long delays, and was one of the driving forces behind the 2017 Appeals Modernization Act.

After receiving a decision from the BVA, some cases opt to all the way to the Court of Appeals for Veterans Claims. The CAVC is a federal court with a federal judge who uses federal rules. These cases are complex and rather difficult to win. The Veteran must show that the BVA clearly made a mistake.  If the lower decision could have gone either way, the Veteran typically loses at the CAVC level.

Since your appeal could end up at the CAVC, it is important that your VA disability attorney is prepared to handle this process. That means more than tenaciously representing you in court. That also means your lawyer should be familiar with all procedural rules and nuances in both the BVA and the CAVC.  Some lawyers are only competent in one of these two forums.  Rathka v. Wilke, one of our 2020 cases, is a good example of what we are talking about.

During service in Vietnam in the mid-1960s, the Veteran hurt his head in a parachute accident. He struggled with epilepsy and other Traumatic Brain Injury (TBI) symptoms the rest of his life. When the Veteran died in 2016, the coroner listed the cause of death as a combination of chronic atrial fibrillation, coronary artery disease with hepatocellular carcinoma, acute pulmonary embolism, and portal vein thrombosis.

His widow filed a Dependency Indemnity Compensation claim, which the VA promptly denied. The Claims Examiner reviewed the medical records and concluded that the Veteran’s congestive heart failure and liver disease, as opposed to the service-related TBI, caused the fatal conditions.

However, as mentioned, the weight of evidence is usually irrelevant in CAVC matters. Instead, there must have been a clear error at the Claims Examiner or BVA level. In this case, our diligent legal team paid great attention to detail and found just such an error.

The Claims Examiner backed up his conclusions that the Veteran’s death was not service-related. As is often the case, the BVA failed to explicitly list its reasons for its decision. The BVA may be an appeals body, but it cannot rely on mere conclusions. It must issue fact-based decisions.

The CAVC remanded Rathka and required additional medical evidence regarding the TBI and related conditions.  This additional evidence could change the outcome of the new decision.  So, the appeal to the CAVC and resulting remand was a second chance and an opportunity to obtain a favorable decision.

DIC claims are difficult to establish, but we have a solid track record in this area. For a free consultation with an experienced Veterans disability lawyer fill out the contact box to your right. We are here to represent Veterans nationwide.